“If I only knew then what I know now (about mental performance hacks!).”

As a “mess-to-success entrepreneur,” I’ve seen both the deep end of drug addiction and the pinnacle of corporate success, as well as entrepreneurial glory with multiple start-ups. But in between were several years where I really struggled as an executive.

Nose to the grindstone every day…but constantly overwhelmed.

It took me a while, but eventually I learned some mental performance secrets that helped me go, in the space of just two years, from struggling, underachieving, lowly account executive, to vice president and employee of the year at the largest ad agency in the U.S.; while in my spare time co-founding a start-up that was later sold for 8 figures. Not bad for a classic ADHDer with a sordid history of booze/drugs/crime.

But what does that have to do with you?

There’s a good chance you’re not taking advantage of these mental performance secrets – so I’ll share the before-and-after impact of a couple of these principles and maybe they’ll help your mess-to-success story. (Um, I’m not saying you’re a mess…I should’ve said, “Your good-to-great story.”) 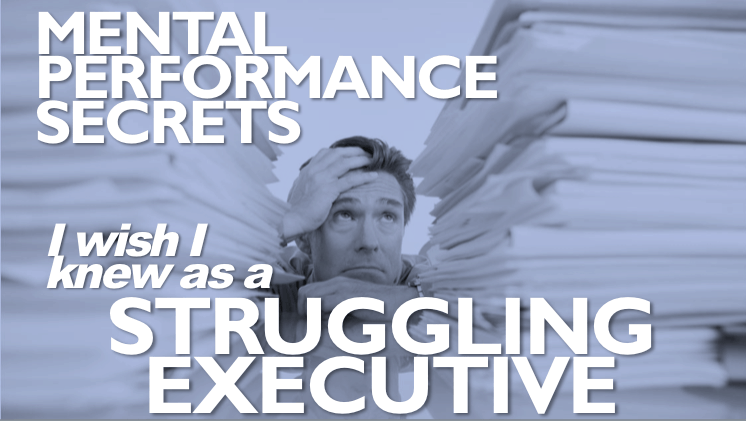 Can some simple mental performance hacks help your ADHD? Yep.

Lots of Input. Not Much Output.

I worked HARD throughout my career as an executive. Long hours, weekends were the norm. My input was stellar. But early on, my output was in the gutter.

And there’s a good chance you’re operating at a high level of input, but not getting your full potential of output and accomplishment. And you may not be savvy to some of the performance secrets that I’m about to share. Principles I wish I’d known when I was a struggling executive.

I wish I knew… that My Brain is My Engine. Might sound obvious. But few of us truly understand that our brain has its own life – and its own needs that are distinct from those of our body.

Think about your car’s engine: You treat it differently than you do the fenders and leather seats…which you care for from the outside with buffing and polishing. You care for your engine from the inside…the right amounts of high quality fluids, lubricants and of course, high-octane fuel.

Before I learned this principle, I was “buffing the outside” with nice suits, a few push-ups and sit-ups here and there, and fueling my body with whatever quenched my thirst and quelled my hunger – lots of sugar, carbs and coffee. But your body can get energy from any crap – your brain needs to be fed right.

After I understood this – I began tending to my body in one way, and to my brain in another…in two simple ways:

The research tells us that “aerobic exercise for 40 min offers the greatest probability of significant BDNF elevation.” So line up some protein snacks (sugar sucks!! carbs kill!!) and push yourself a little harder on whatever your workout routine is. You WILL feel the results.

I wish I knew…when I was a struggling executive, that  My Energy is Not Linear. We don’t operate like machines – just flip on our brain and it  goes until we decide we’re done. We all kinda know that much. But neither is our energy linear in a steady declining fashion, where we just gradually lose mental clarity and stamina over the course of the workday. Our energy is cyclical.

Before I knew this, here’s what would happen: I’d set about working on a tough, important task and as soon as I’d begin to flag, I’d think, “Welp, that’s it for me!” …and I’d switch over to easier work – more often than not, into pseudo-productivity (meaningless tasks that make you feel productive). So the tough, important task’s completion gets delayed.

Plus, I’d get frustrated, and further reinforce the belief that “I just can’t work on tough stuff for very long” …or that I’m lazy.

After I understood that our energy is cyclical – I began using a timer for single-tasking sessions…then doing a simple recovery ritual when the timer goes off or when I feel the energy dip. To ride the energy cycle back into another powerful singletasking session: Re-fuel with protein — nuts and dried fruit is my magical mix. Or do a “power pose” (stand for two minutes with hands-on-hips, just like Wonder Woman/Superman) or a quick 5-minute meditation. Mandatory is to get up and walk around. Or bang out 10 push-ups.

Easier said than done, I know. But productivity hacks and other mental performance tips like these made a massive difference for me — and they definitely can for you.

Intrigued About the Potential for Mental Performance Hacks Like These?

I dedicated an episode of Crusher™TV to 5 Mental Performance Secrets I Wish I Knew as a Struggling Executive, and below is the preview of that episode. My Guest Expert, Dr. Evan Hirsch, also shares insights on how toxins may be affecting your mental performance! Click the image below to check out the preview. 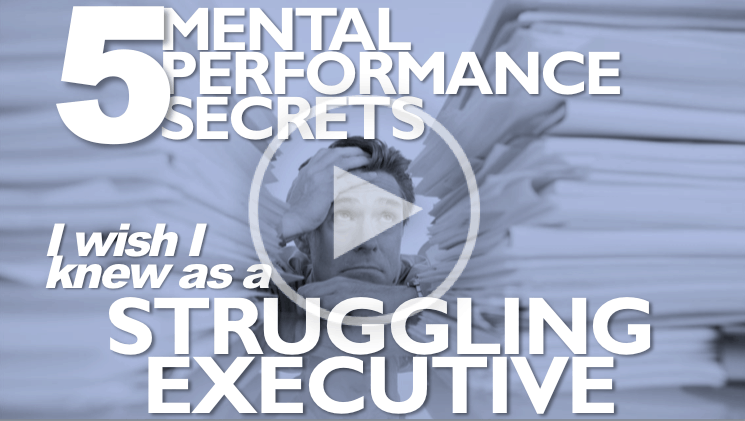 You might get a lot out of watching that entire episode of Crusher™TV where I dig deeper into this topic. (You can become a member for a buck and cancel any time ya like.) It’s Episode 73 , and you can preview that episode above.

Thank you for your great secrets. I’ve tried the timer idea and that seems to work when I have to tackle a big project at home. I’ll have to use it at work, too.

Glad that’s working for you. It’s such a simple concept but few of us give it a try. Kudos to you for making a go of it!! Alan

I am so loving you, thank you!!! You are really helping me!

You are so welcome Jennifer!! Keep at it!! -AB