Are Productivity Apps Wasting Your Time?

Would you like to have an extra day each week? Of course you would. We never have enough time! And as I often say, “If there’s one thing we ADDers never have enough of, it’s time. So the last thing we should be doing is WASTING IT!”

I can tell you, I am NOT efficient or fast at anything I do. But I’m productive and usually effective…cuz I use the time I got pretty well.

You Can Steal Back an Hour a Day

With some sober awareness and a few simple-yet-powerful brain hacks and life hacks, you can easily steal back an hour a day…basically, a workday each week. Not joking.

In this post I’ll share some wake-up-call insights on “time saving” apps, and in a sequel, I’ll dig into some classic time-burners at work.

A Word About “Time-Saving” Apps

We all want to have shortcuts to save our butts… 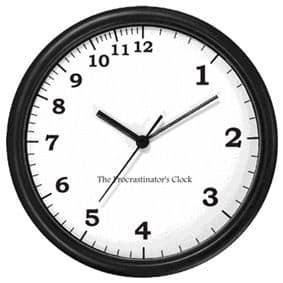 (Yes, that’s the procrastinator’s clock…you know this one, don’t you?) And we know how our gadgets are saving us all kinds of time and effort on so many things. But, when it comes to time-saving apps, think about these three things before downloading the next gotta-have-it productivity app:

…with some warm, soft illustrations for ya. According to a study by Localytics… 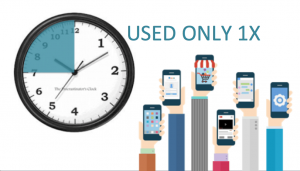 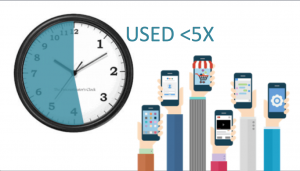 And more than half are used fewer than 5 times. 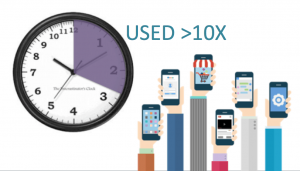 Only a third are used more than 10 times.

So chances are, two thirds of the “time saving” productivity apps on your phone, have COST you time.

Now, everybody’s different, and I know people who grab the latest app and are workin’ it from day one right up until the better competing app or version 2.0 arrives.…But I’m not one of those people and I KNOW it…so I don’t waste ANY time hunting for miracle apps.

That alone probably gives me a few extra minutes every day. If you even suspect you’re like me in this regard, maybe you shouldn’t be quite so app-happy?!

And besides, devices and productivity apps can’t compete with our bad-ass brain for saving you time. That is, if you’re hackin’ your brain right.

And speaking of brain hacks: I recently devoted an entire episode of Crusher™TV to brain hacks for “having an extra hour each day”. You can check out some previews here. Hope you will — it was a great episode (#19, with Guest Expert Tom Bergeron, who created a start-up incubator for ADHD entrepreneurs!).

‘Til next time…guard your time!!

2 Responses to “Are Productivity Apps Wasting Your Time?”

Personally, I’ll stick with a paper planner. I have ADHD and when I become distracted by my phone, I’ll just play games on it. Though I envy others without this issue.

To thine own self be true — and hats off to you for knowing yourself!! -AB