Home/Blog/Death to Procrastination: Crush this ADHD Barrier to Action

Death to Procrastination: Crush this ADHD Barrier to Action

The good news is, most procrastination is due to mental barriers built on the ILLUSION that we can’t or don’t know how to do the tough stuff. There are three primary barriers:

In an earlier guest blog at coach Carol Gignoux’s LiveADHDFree, I showed how how the first barrier, irrational fear, keeps us from taking action, and I prescribed a simple one-two punch natural ADD remedy to knock down that barrier to progress. Be sure to check that blog out, but first, let’s dispatch with the next one…

Disarray as a Barrier to Action for ADHD Adults

As mentioned above, disarray has two sides: deciding what task to work on, and once that’s decided, figuring out how to get it started.

The first SHOULD be easily dispatched with: just ask yourself, of all the things on your to-do list, if you could only work on TWO of them today – what would they be? In most cases they’ll be among the tough and/or important things you’ve been putting off.

AH, you might say, “But my problem is that I can’t decide which two things because my mind is a jumble and I can’t evaluate them and…AHHHH!! – they ALL feel equally important!!” 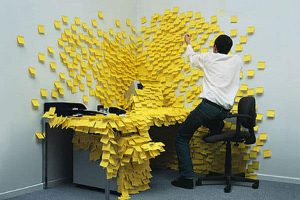 Too many to-do’s = mental disarray – but there IS a way through it!

That’s OK. Classic ADDer dilemma. But think about this: if you truly can’t make priority distinctions between these things, you’re fully justified in picking ANY one and ATTACKING IT! So pick one – at random – and start attacking it. Pull the trigger. It beats the hell out of not starting ANYTHING cuz you’re unable to prioritize! 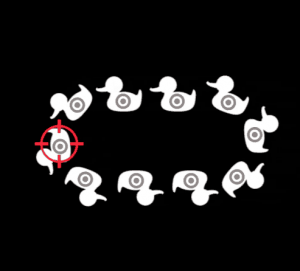 Can’t prioritize among many to-do’s? Don’t let that stop you from action!

But I Don’t Know Where to Start!

Now, once the tough task has been identified, often you don’t know where to start or what the best approach is or how to yada yada yada…and a bazillion other thoughts that keep you from starting.

The trick is…START. It doesn’t matter which step is the first. We often procrastinate waiting for some brilliant insight that will make the project easy. But those insights only appear when the work is under way. So the longer you wait to start, the longer you postpone the solution.

So what if you’re not attacking it perfectly? Attacking IMPERFECTLY beats the CRAP out of not starting it!!!

There’s a great quote from Dr. Neil Fiore that sums up this simple truth powerfully: “Keep starting – finishing will take care of itself. If you must worry, worry about starting, never worry about finishing.”  Indeed, you can start many times every day. Always focus on what you can do next. One little step at a time. One start at a time.

Bottom Line: If you can get out of the trap of thinking you have to PERFECTLY choose the next task and then PERFECTLY execute and finish it, you can really start getting things done.

Next time out, the trick to crushing procrastination on things we know perfectly well how to do, but just…don’t…feel…like…doing…uggghhhh. (i.e., Indifference. Here’s the link to Death to Procrastination, Part 3.)

‘Til then, Crush away that disarray!

2 Responses to “Death to Procrastination: Crush this ADHD Barrier to Action”

This is great for non ADHD people as well. I love the idea of just RANDOMLY pick a to do and do it. I usually have a few top priority to do’s and get stalled out when I feel I need to pick one.
Looking forward to the indifference blog too.
Thanks!

You’re so right Yvette — this is powerful for anyone who has a panic-inducing to-do list! TX. Indifference blog is up: https://addcrusher.com/death-to-procrastination-part-3-get-drudgery-done/ Enjoy…(and say hello to all in GRRRRRR!) -AB