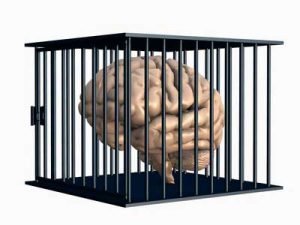 ADHD is a huge problem. Duh. But did you know that it’s a huge problem for society? Consider data from our prison populations – suggesting that anywhere between 10% and 50% of those incarcerated are ADHD, compared to 4% for the general population.

This was the topic of an eye-opening presentation at the conference, as well as the Keynote Speech. It’s really startling. But the British, for one, are using this startling knowledge constructively: every person entering the British correctional system is now screened for ADHD – so that possible treatment can be provided, giving these inmates a better chance at defending themselves at trial, surviving prison and, most importantly, succeeding upon release.

Crime, Punishment and ADHD in California

Actually, when you think about the high incidence of alcohol/drug abuse and petty crime among undiagnosed adults with ADD, maybe it’s not so surprising that our jails are filled with our busy-minded brothers and sisters. And in California and some other states that have had stringent “three strikes and you’re out” legal policies, you’ve ended up with very high numbers of non-violent drug offenders doing hard time.

The Costs of Untreated ADHD

This now has California on the ropes – because their full prisons are of course costing taxpayers billions a year to house these non-violent inmates. So now they’re crying “uncle” and beginning to grant early releases to them. But WILL THEY GET TREATMENT? Or will they be tossed out into a lousy job market as ex-cons with still no idea why they gravitated toward substance abuse in the first place?

The good news is that there are people here in the U.S. now waking up to this problem and doing something about it. A few programs (one particularly successful one in Delaware) are popping up around the country that seek to help these folks improve their lives as inmates and their odds of succeeding upon release. Want to help? Write your government representatives telling them you want more evolved thinking when it comes to ADHD and our criminal justice system.

P.S.  If you haven’t yet heard of www.CrusherTV.com, I hope you’ll check it out. Each Monday night at 10pm we “air” another episode chock full of useful productivity tips and “brain hacks”, and our Guest Experts provide more great ideas. Tons of other benefits for members, including free group coaching sessions. Hope to “see” you there!  – Team Crusher