Know the Barriers to Get Started on a Big Project, and You Can Start to Break them Down

So, you’ve had this Big Idea for a while and you still find it brilliant every time you think about it. Or you’ve been assigned a major project and you’re stoked about it cuz it could yield some good results for your career. But it hasn’t gone beyond that. You haven’t started it. Why IS it so hard to get started on a big project or idea?!

Why won’t our engines fire up on that major project, even as the deadline nears?

In a recent Episode of CrusherTV™, I introduced what I call the Roadmap for Any Big Thing – whether an idea or a major project.

It consists of 4 Phases… 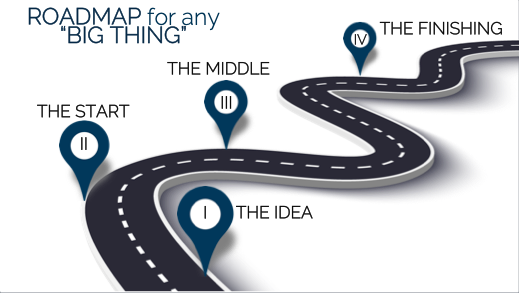 The Roadmap for Any “Big Thing”: Each Phase has unique barriers to action.

And I talked about the importance of understanding which of the 4 Phases of a Big Thing you’re stuck in. Because each Phase has its own unique barriers and solutions – and once you identify that Phase, you can choose the right mental tools for breaking through to the next level – and onward to completion.

In this post, I’ll illuminate the main barriers to getting started (Phase II), and ways to mitigate those barriers, so you’ll be more likely to finally…start!

(By the way, perhaps you’ve noticed in your struggles with procrastination on big projects/ideas…)

“The bigger the idea, the bigger and hairier the project, the more likely we are to either procrastinate on starting it, or never start it. Even if we know it would be a great thing!” – Alan P. Brown TWEET THIS 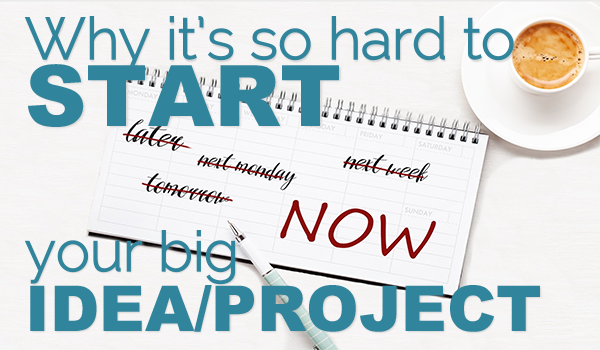 Phase II – The Start, is where so many of us get stuck. It’s that place between “OK, this is a clearly defined thing that I can and will do,” …and actually taking that first concrete action of starting it. There are three key barriers here that get in our way:

An obvious barrier is plain old procrastination in the form of Temporal Discounting: “No worries, dude – there’s plenty of time on this!”

Or as is often the case with Big Ideas like our first book or our idea for our side-hustle, there is no firm deadline for completing them. So there’s never any fire lit under your butt!

This is of course classic ADHD behavior, right? We conveniently remain blind to the encroaching deadline — or wait until next year to think about our book/app/start-up again — until either it becomes a massive inconvenience requiring our action, or we just give up on it.

How to Mitigate This Barrier and Get Started on a Big Project: One way to fight back is to have a talk with our Future Self. What do I mean? This quote sets it up nicely:

“Future selves are considered to be strangers, to whom one can pass the buck and impose a heavy and uncompensated burden.” – Christine Tappolet, PhD  TWEET THIS 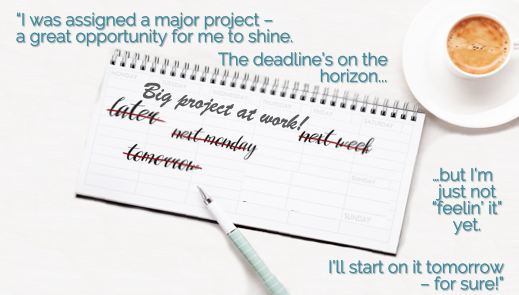 So we must listen to our Future Self when he/she says, “Please don’t burden me by leaving this until the last minute!” — and create an unpleasant deadline for our Present Self to at least get started. One that’s way sooner than the actual deadline (or desired finish, if there’s no formal deadline).

Then populate your calendar with reminders galore that will pop up daily at the very least. The constant reminders will also help mitigate that temporal discounting.

Another barrier, particularly on big, important things, is Fear of Failure: As productivity guru Peter Bregman says, “We procrastinate on that big project precisely because it’s important. So important, in fact, that we’re too scared to work on it. ‘I’m afraid. Afraid that I’ll fail. That I’ll spend a lot of time on it — while other more immediate things don’t get done — and it’ll be terrible, anyway.’”

Got Fear? Call It Out!

How to Mitigate This Barrier: The key first step in de-fanging any fear is to name your fear.

That’s right, all you need do is describe what it is you fear whenever that fear has you stuck. Doing so is scientifically proven to begin shrinking that fear.

Kristy Dalrymple, professor of psychiatry and human behavior at Brown University, says, “The more you try to suppress fear, either by ignoring it or doing something else to displace it, [like escaping into some other, easier activity] the more you will actually experience that fear.”

Naming your fear allows you to accept that you are feeling fearful which lets you examine the causes of your fear – and in doing so, you are shifting your processing away from your lizard brain and into your frontal lobe – where reason and problem-solving begin to shrink it!

The Biggest Reason We Procrastinate on Big Projects 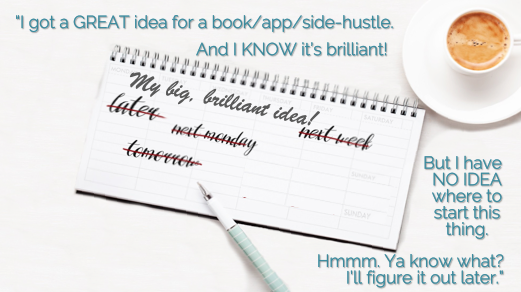 And the third classic (and biggest) barrier is Not Knowing Where to Start. “When I just THINK about starting it, I get frustrated because I can’t figure out where or how to start it.” And this should be no surprise, because a common characteristic of all “Big Things” is that their structure is big, complex and therefore, often unclear before we start.

How to Mitigate This Barrier: I elaborated on this in CrusherTV™ Episode 108 (see more on that, below) and in a CrusherTV™  blog, but in a nutshell the mental trick is to not worry about how or where to start. To quote Dr. Martin Luther King, Jr., “You don’t have to see the whole staircase. Just take the first step.”

Huh? Yes, just start. Start before you know where to start, by starting anywhere. Because once you take that first step, you can now see more of the staircase! Then take one more step. Then another.

That’s how you get out of this trap!

Now that you understand these three barriers to get started on a big project or your big idea, you’re in a much better position to fight back and beat them down.

Want 3 Powerful Solutions to Get Started on a Big Project?

In addition to the three above “mitigators” to start breaking down those barriers-to-action, there are also three powerful solutions to totally crush those barriers. One’s a brain hack, one’s a powerful tool you’ve probably heard of, and the other is a no-brainer physical hack.

I’ve served up the powerful brain hack in this CrusherTV™ Blog, but if you want to dine on all three evidence-based strategies that can help you get energized, and aggressively, intentionally, FINALLY start your big thing, watch the Preview of Episode 108 and consider joining as a Member so you can watch the entire Episode, which also features veteran ADHD coach Lynne Edris.

What’s Crusher™TV? It’s not just an online TV show that teaches ways to have more control in your life. It’s a LIBRARY of over 100 20-minute videos teaching ways to beat procrastination, get prioritized, get organized, manage your time, and more. You might get a lot out of watching the entire Episode 108, How to Finally Start Your Big Idea/Project, where I dig deeper into this topic. (To watch full episodes you can become a member for a buck and cancel any time you like, but either way, you can preview that Episode by clicking the image below.) 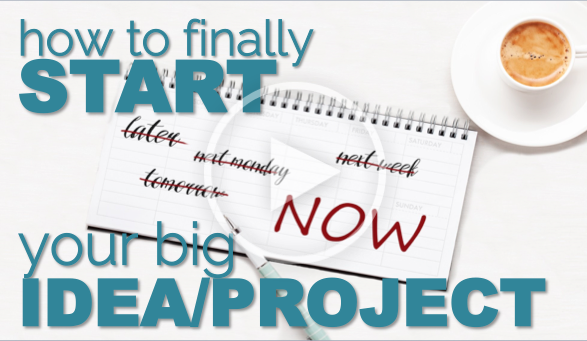 Episode Description: We all have at least one big idea or project we want or need to start. But too often, they languish, un-started. I’ll show why you’re stuck and evidence-based ways to get going on your biggest, scariest idea/project. Plus, coach Lynne Edris shares keys to your Unique Operating System.