Home/Blog/How to Delegate Work (So YOU Can Work LESS)

How to Delegate Work (So YOU Can Work LESS)

How to Delegate Work? Start by Knowing The Barriers to Delegating

If you’re overwhelmed at work, at home, or both, there’s a really good chance you’re not delegating enough. You need to know some of the secrets of how to delegate work.

Delegating is a critical survival skill in the corporate world – but also in our own small businesses and even in running our households. It allows us to focus on the tasks and projects that really power us forward and upward. Yet delegation is a tricky skill nobody ever really teaches you. Not in school, or even on the job.

No wonder so many of us fail to delegate — or delegate enough. For most folks, it’s a combination of…

But for us ADHD adults, it’s even more difficult.

Delegation is an executive function, so, along with prioritization, time management and planning, our weak executive functioning chops make these kinds of tasks doubly difficult. In my award-winning ADD Crusher™ instructional videos, I talk more specifically about why delegation is so hard for us ADHDers, and I share a couple solutions. Here’s a short clip…

The High Costs of Not Delegating 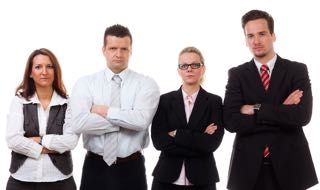 One of the reasons I floundered in my first six years as a corporate executive, despite hard work and long hours, was that I didn’t know how to delegate work. Every year I’d get a positive review — but not the promotion. Because, as my bosses would say, “Alan, we can’t put more people under you, because the ones that are, don’t have anything to do! You’re doing it ALL!” Needless to say, my team was miserable. And my career trajectory was bleak.

The costs of not delegating are indeed steep: Beyond the handicapping of our careers, we continue to do more work than we need to be doing, keeping track of tasks we shouldn’t be worrying about. Plus, for entrepreneurs and managers at any level, we’re holding our businesses and our employees back by not letting go of work. And then there’s the stress: We’re working hard, but instead of enjoying our achievements, we’re stressed and overwhelmed with too many responsibilities.

And the upsides of delegating are many and massive — in a nutshell, you get to work less and focus more on the things you do best! 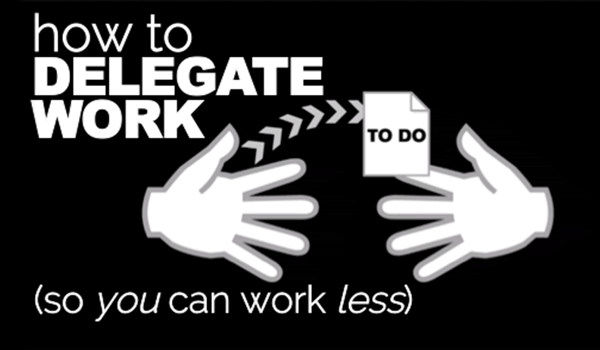 The Psychological Barriers to Delegation

Digging a little deeper, here are the Top 10 Reasons We’re Not Delegating (a.k.a., the Psychological Barriers). Think about each one and whether you may be handcuffed by it…

ONE.  “No one can do it as well as me…” Which may be true at the moment, but you had to learn it at some point, so others can indeed master the task just as you did.

TWO. “My approach is the only one.” That’s crazy just on the face of it, but it’s a belief we often hold under the surface.

FOUR. “I’m afraid my team (or subordinate or virtual assistant) won’t be able to handle the increased responsibility.” You won’t know ’til you try!

FIVE. “I don’t want to increase my team’s (or sub subordinate’s or virtual assistant’s) already burdensome workload.” Have the conversation with them, then decide.

SIX. “I’m afraid they’ll say no.” Nobody likes rejection, but research suggests a) you have more influence than you think, and b) you’ll actually gain their respect for asking.

SEVEN. “I don’t want to let go of tasks I enjoy doing.” Great. You wanna to keep doing tasks you enjoy, while more important tasks that ONLY YOU can do aren’t getting done?

EIGHT. “I’m a people pleaser. It’s hard for me to say ‘no’ to people who ask for something – and even harder …to ask for help.” (See Six, above.)

NINE. “I’m just too busy to delegate — it’s quicker and more efficient for me to just do it myself.” You’re too busy because you’re NOT delegating, and it’s NOT more efficient. Period. And…

TEN. And this is the big kahuna — “I don’t know how to delegate work, especially complex tasks or projects.” More about this at the end of the post.

Hopefully you see a little of yourself in one or more of these barriers to delegation. This is a great starting point for developing your delegation muscle.

But there’s more to successful (and effortless) delegation of work, all of which I eventually mastered, helping me dramatically alter the trajectory of my corporate career — and then launch multiple successful start-ups. If you’re interested in a peek at the next level, read on!

Want More Simple-Yet-Powerful Secrets of How to Delegate Work?

In addition to the above Psychological Barriers-to-Delegation, there are still the matters of how to identify WHAT to delegate, and knowing WHOM to delegate to. I delve into both of these in Crusher™TV Episode 111 — where I also serve up 5 Secrets to HOW to Delegate Work. (To watch full episodes you can become a member of Crusher™TV for a buck and cancel any time you like, but either way, you can preview that Episode by clicking the image below.) 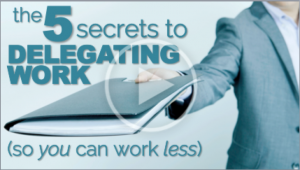 What’s Crusher™TV? It’s not just an online TV show that teaches ways to have more control in your life. It’s a LIBRARY of over 100 20-minute videos teaching ways to beat procrastination, get prioritized, get organized, manage your time, and more. You might get a lot out of watching the entire Episode 111: 5 Secrets to Delegating Work, where I dig a lot deeper into this topic. Click the image to watch the Preview.

Alan P. Brown, an internationally recognized ADHD/Productivity Coach, TEDx Speaker and #1 Best Selling Author of Zen and the Art of Productivity: 27 Easy Ways to Have More Time, Earn More Money and Live Happier is the host of Crusher™TV, where he and his Guest Experts share simple ways to get more done in less time with less stress. Follow Alan on Twitter and on Facebook.