How to Say NO (So You Can Say YES to Yourself)

BEHOLD, THE POWER OF NO

Do you know how to say no? Saying no is a super power that can change your life. Fortunately for us, its not the kind of power you get from a radioactive spider bite or gamma rays. All you have to do is just say — No.

There are 1,440 minutes in every day. But only a small percentage of those are available for intense focus on the core of your job. And the more stuff you say “yes” to, the smaller that percentage will be.

Congratulations, you have 1,440 minutes available to you tomorrow. But you’ll want to use them carefully. Because when you take out minutes for sleep, eating, taking care of yourself, taking care of others, miscellaneous non-productive stuff at work, you’ll have less than 180 minutes of truly focused time to do your job’s core work.

If you read my previous blog post on Energy Vampires, you know how dangerous they can be. Well, one of those energy vampires is you. And one of the reasons you are an energy vampire is that you are saying “yes” to too many people. Every time you do, you give away a bunch of your precious time and energy. This is why you must learn how to say no. 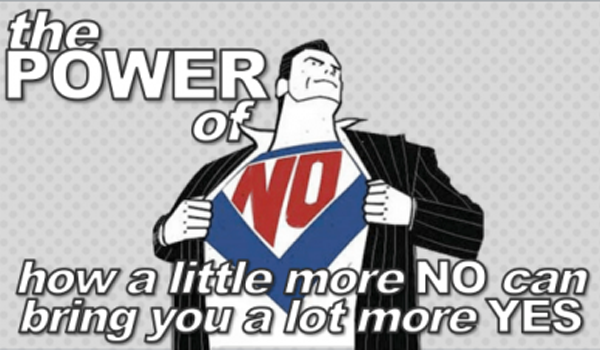 Saying no can be difficult at first, but the power of the word can be life changing.

Well, we are programmed for “yes” pretty much from the get-go, starting in childhood. Your job, from toddler to preschool, was to say “yes” to instructions. Saying “no” was bad, even grounds for punishment. Then, you got to school and that yes-is-good/no-is-bad thing was reinforced by your teachers and even your prospective friends. Then there was adolescence, where intense peer pressure had you yessing everything right up to petty crimes, depending on who your peers were. (Grand larceny in my case.)

Then you got your first job, and it was: “Yes, I can do that! Yes, that too!” Indeed, in our jobs and in society generally, we live in a Culture of Yes.

Life coach Susan Lasky says, women may have particular difficulty saying “no” because: “We think we can, and should, be able to do everything — the strong, passionate Wonder Woman. We think we need to be everything to everyone in our lives.”

But whether you’re an aspiring Wonder Woman or a someday Superman, saying “yes” is easy. Because, as “Zen Habits” author Leo Babauta says, “Current self thinks that future self can handle it, no problem. But then future self becomes current self and suddenly has to pay up for all the obligations placed upon him by all the optimistic past selves.”

And so, all our yeses make it more difficult to do our job well and to get caught up, get promoted, get raises. Yet even a few simple nos across the course of the day can yield huge gains in your available time’s bottom line.

Tim Ferriss once said, “What you don’t do determines what you can do.” And he has a list he calls his not-to-do list, in other words, a say-no-to list.

SOME EASY NOs TO START WITH

Using a few of his not-to-dos and a few of my own mixed in, let’s see what one day of exercising even a tad of the Power of No might yield:

Consider making your own not-to-do list. Take a minute to write down, say, five things you’re going to say “no” to tomorrow.

Those were some relatively easy nos. And they added multiple minutes to my available productive time! You may have noticed though, that most of these didn’t involve saying “no” to other people. With those nos, things get a little trickier. You can read more about some of those tough nos here on a CrusherTV blog that goes a bit deeper into this topic.

And always say yes to the firm belief that whatever’s in your way is yours to crush!

INTERESTED IN THREE EVEN MORE POWERFUL WAYS TO SAY NO? DON’T WORRY, YOU CAN SAY YES TO THIS ONE

I dedicated an episode of Crusher™TV to The Power of “No”, and below is the preview of that episode. Click the image below to check out the preview for more advice on how to say no.

What’s Crusher™TV? It’s not just a weekly online TV show that teaches ways to have more control in your life. It’s a LIBRARY of over 95 20-minute videos teaching ways to beat procrastination, get prioritized, get organized, manage your time, and more. You might get a lot out of watching the entire Episode 45, The Power of No, where I dig deeper into this particular topic. (To watch full episodes you can become a member for a buck and cancel any time ya like, but either way, you can preview that episode above.)

YES! This great article resonates –and is TIMELY with me!!!! I will track my No’s this week! Thanks Alan!