A few weeks ago I wrote a blog about Impostor Syndrome, the “extreme edition” of negative self-talk. Officially, it’s defined as the “psychological phenomenon in which…despite external evidence of their competence, people remain convinced that they are frauds and don’t deserve the success they’ve achieved” – per Wikipedia.

The blog post got quite a response from readers – and I’m not at all surprised. Because we ADHDers subject ourselves to enough toxic levels of self-doubt to set off a Geiger counter.

Just to get you back up to speed, here are some signs that you might be suffering from this ADHD negative-self-talk-on-steroids:

And here are two fabulously successful people reflecting on theirs…

“The exaggerated esteem in which my lifework is held makes me very ill at ease. I feel compelled to think of myself as an involuntary swindler.” –Albert Einstein

“Sometimes I wake up in the morning before going off to a shoot, and I think, I can’t do this.  I’m a fraud.” – Kate Winslett [TWEET THIS]

This blog post is the “2.0” version of the original because here, we’re going to slay this insanity. So whether you are just a dabbler in occasional negative self-talk or a full-blown impostor syndromer, here are five simple steps for getting back to reality…if not self-lovin’…

Identify where you deserve some credit for whatever success you’ve achieved. Hard work. Getting up every day and giving another go despite what happened yesterday or last week. Coming up with some decent ideas. Find these positives, give them more than a passing thought, and accept them into your heart.

Recognize that the statements you’re making about yourself are coming from the same place as the ridiculous contention that we are “lazy, stupid or crazy.” And as we ADHDers now know, thanks in part to Kate Kelly and Peggy Ramundo’s fabulous book with this phrase in its title, we are none of those things. We’re just wired differently. With this in mind, look for the absurdities in your negative views.

Stop Comparing Yourself to Others

This is a biggie. Through all our foibles and mess-ups and embarrassments and resulting insecurities, we have always looked at the person next to us and thought, “Geez, why can’t I be like HER?!” But fact is, nobody knows what the hell they’re doing! And that seemingly flawless “her” is probably as much a bundle of nerves and self-doubts as you are. (Refer to above quote by Einstein…or any of a million other famous/successful people who we think have their sh*t totally together.)

Fake It ‘Til You Make It

There’s buttloads of research telling us that this really works. For instance, you can become happier just by smiling (has to be a big smile, but it’s proven to work). You can increase your self-confidence by posing like Wonder Woman. This is neuroplasticity at work, by the way. (More on that another day.)

We must pay more attention to our successes (as described in ADD Crusher™ Video II, Way 9). ADHD teens and adults tend to “filter out” successes in their thoughts and memories – leaving only their ‘failures’ to dwell on. But it’s not enough just to think about our successes: we have to record them by writing them down. Ideally in a journal, but even if just a stickie note. A written success is remembered. An unrecorded and forgotten success may as well never have occurred. 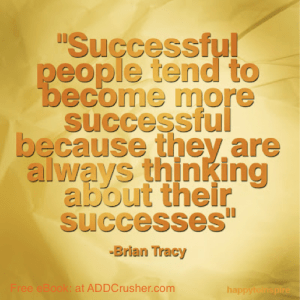 Stop dwelling on your foibles. Start scoring your successes!

Bottom line, our ability to push forward powerfully has much to do with how we judge our own past.

Now, will you stand with me in the spotlight of fabulousness?

P.S. – Have you checked out the Crusher Pinterest page yet? Tons of great eye candy on there. Check it out and follow some of our boards!

BTW, Alan, I’d personally need to revise ‘fake it till you make it’ to ‘see it until you BE it’- some shred of inner reality has to be there.

The big Done-It list: I need need to do! The challenge will be to NOT downplay/relativize what’s there and continue making myself less-than and also-ran. I have a strong ability to admire and an even STRONGER ability to see myself worth-LESS by comparison. Pep talk, please!

Thank you for the wonderful compliment!!

This is exactly what I did last month!! I was so tired of bashing myself. Did not make me feel confident at all. It occurred to me to write down ALL my successes, beginning from the beginning. i discovered an important reality. Events that happened in my life, I gave absolutely no credence, no value, no sort of label such as ” a successful event”, ” Go to the top”, or “You made it”.
I didn’t think I’d have much at all on my list..after all, what have I ever accomplished?? As far back as I could remember, I started writing my accomplishments, accolades, and successes on paper..right from the note I brought home from my kindergarten teacher praising me for being the ”sunshine in her class’, and other good stuff!. My list grew and grew, and my inner truth was finally revealed. Rather than being a ‘screw up’ over the years, I realized my strengths, abilities,, and overall generosity. I’ve declared
me AWESOME ! No doubt about it . And, I recommend that anyone do this exercise. It works. I was faced with myself,and I’m not so bad after all. I’m AWESOME !!!

This is inspiring writing Irish Queen…Thank you!!