“The one thing we ADHDers never have enough of is time. So one thing we should never be doing is…wasting it!” -Crusher 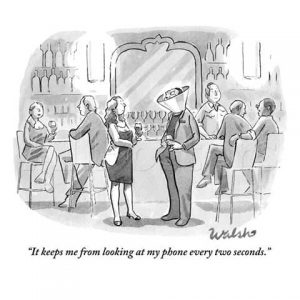 A while back I posted a blog with some less-than-typical ADHD time management hacks. I talked about the time-saving benefits of popping protein, reeling in rumination and rewiring waiting time.

I’ve got tons of these in my Arsenal of Crush, and this Part 2 post will share a few more of them. What they all have in common is that they’re easy to implement and, if made into a habit, can save you gads and gads of time every day. Here ya go…

Obey Your Strong and Weak Times
You gotta know your mental strong and weak times. We all have ‘em – some of us are total bad-asses in the morning, then overcooked spaghetti in the afternoon (that would be me). Some are zombies in the morning and vampires-on-steroids at night. The trick is to identify your up- and down-times, and try to focus on easy-vs-brutal tasks accordingly, e.g….

This one’s nicely explained via video – here’s a Crusher snippet on YouTube with this simple ADHD time management tip.

This one’s very, very simple. The phrase, “screensucking”, was coined by Dr. Ned Hallowell to refer to the amount of time we all waste in front of electronic screens. I’ve blogged on this topic specifically because it is such a massive time-wasting conspirator, especially for us easily screen-addicted ADHDers.

Needless to say, it’s not just about watching too much TV. It’s about spending inordinate amounts of time with all our gadgets – laptops, tablets, phones, video games. These are some of the most abused “drugs” in ADHD Land. Beware them all! And if you can find just half an hour of needless screenscucking in your average day – and then cut it the hell out – you give yourself the gift of over three hours a week in badly needed breathing room.

If you have to do two things today – let’s say, write a speech and do laundry, which do you start first? Or how about this one: two of your to-do’s in the next hour are to finish writing a key memo and to brief a subordinate on a time-sensitive task – both being due by end of day. Which to start first?

The laundry and the subordinate briefing, of course.

Why? Well, if you haven’t yet figured out what they have in common, it’s that both the laundry and the briefing are things than can be “put into motion”. Meaning that you can get them going and let them “do their thing” while you then embark on your speech or memo.

Chances are, if you had written the key memo first, you’d have found yourself scrambling toward end of day begging the subordinate to, “Please, can you get this done in the next hour?!” Not good management of people…nor of your own time.

If you really want to put some of this advice into action, I suggest you pick ONE and zero in on it. Identify the one that made you nod your head the most, or that had you mumble, “Boop. That’s so me!” That’s the one you’ll have the best chance of turning into a habit that actually makes a difference in the days and weeks and years to come!

@Sharon — yes, it’s a tough burden to carry in a carry and it can really drag you down. But on the bright side, at least you now have the diagnosis and can deal with it on more aware/enlightened terms.

I don’t have any vested interest in whether people use meds or not, but I encourage everyone to explore all possible options. Meds have worked for me for 18 years, although I use less and less of them each year.

Also don’t overlook diet/exercise/sleep as killer ways to improve your focus! (Blogs on those topics to be found elsewhere on the site.)

Adult ADD is such high-maintenance… I’ve been recently diagnosed and am worried that it may prove too much to continue with organic tools like ADD Crusher alone. I don’t want to take medication but it’s so hard to slow down and focus on my work. At the moment, my career is in free-fall and I’m procrastinating even though I desperately know what I need to do now! How strange to be gifted with creativity and the incredible struggle to channel it properly!

I bought a Groupon for studying Microsoft Office for looking for that type of job. I didn’t write down when it expires since I figured I would be doing it soon. I finally looked at it 6 months later, but 11 days after expiration as it turns out. It is so habitual to sit down and look at email, Facebook, & read articles but adding something else to my usual computer stuff before deciding it is time to get up and do something else, was apparently one too many things. I had even put a note by the computer after a while to remind me to look at the website. That word ‘habit’ is something else, to say the least. Most likely, I am in no hurry to look for that job, but I usually do better than some people when it comes to not wasting $.

I noticed that you are using a New Yorker cartoon, and I bet you haven’t paid the license fee.

Is that how you “delegate” — by stealing other people’s work?

That’s a fair criticism. Will give it more thought in future. Thanks.

really? like seriously? well afterall it was touching on the word hack. lol anyway, I got a good chuckle out of that cartoon and even showed it to a friend who most certainly is obsessed with the darn Iphone,inet,fb etc.omg..this cartoon was perfect and Im buying the lampshade tomorrow. 🙂 so thx for sharing it .and im feeling so much better lately as your tips play over in my head in all I do, for real, especially “that’s not what Im doing now”, I find myself saying that over and over to myself, and it works! a work in progress of course, but its working and im feeling better so thank you thank you 🙂

Alan,
Great read my friend and powerful “hacks”. I empowered my morning! Off to start the laundry! 😉

Careful on the pattern interrupt. I used to do this, but had the habbit of collecting a mess as I gathered things to remind myself. I ended up with big piles. Keep it in moderation!

Good tips, and easy to absorb. Thanks!

Here’s something that helps me get going: setting up a task for later. Just like the shoemaker who laid out tomorrow’s work before going to bed, only without the elves. It’s quick and easy to lay something out if I don’t have to do it. And it’s easy to start something if everything’s already set up. I get more out of my time both ways. Bonus: I don’t have to decide in the moment what I’m going to do.

Fantastic “brain hack”, Vera. Sort of related to this is what I call “pattern interrupt” — where you put something in an odd place to remind you to do it – putting the laundry basket in front of the bedroom door…putting the dirty dry cleaning right at the front door, etc. Or even flipping something upside down to remind you of some task you tend to forget.

I really like the “put things into motion” tip. I realized I’m already doing it, but now I’m going to look for opportunities to do it more often.