Home/Blog/Self-Talk Lets You Be Your Own ADHD Coach

Self-Talk Lets You Be Your Own ADHD Coach

Self-talk is a powerful tool for changing habits, destroying negative beliefs and just plain being happier.

So…Yes! Mumbling to yourself as you stumble down the street is a sign of intelligence and can make you more productive!

What If You Had a Great Coach with You All the Time?

Imagine if you had a great coach with you all the time, reminding you to, “Stay focused over here, this is your bread-and-butter!” Or providing a reality check, “Yeah, this whole thing you’re worried about? It’s total BS.” Or helping you recover from a setback: “OK, you screwed up. Now, what’s the next play?” Or providing a timely bit of encouragement, “Wait, you’re not sure you can? Why not you?” and “Here’s why you!” or “No ice cream for you!”

Well, you’ve got that coach.

You just need to let that coach step outside of yourself so he or she can start coaching you. 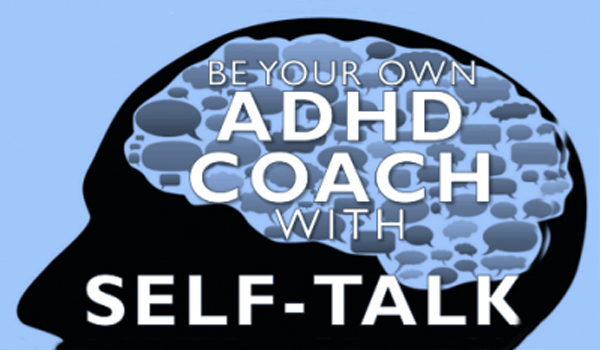 Can you coach your own ADHD? Yep. (But keep your real coach!)

Now, you might think you’re already coaching yourself: “All right, I gotta start this damn project soon or there’s gonna be hell to pay.” Or “Hmmmm, what if I did it this way instead of that way?”

Specific types of self-talk have the power to self-persuade and self-motivate — to crystallize what you should be focused on, help you refocus when ruminations yank you off-course, help you see things more strategically, and make better decisions.

Think about it: How do you persuade or motivate another person? Ideally, you get face to face with them and you talk to them with a reasoned point of view and reiterate that point of view until they finally get it.

Talking to yourself face-to-face can indeed be a powerful tool for getting more done, changing habits and beliefs and just plain being happier.

And when done right, it’s a proven power-tool: A recent paper in The British Medical Journal reports that cognitive behavioral therapy — a form of talk therapy that can be performed on oneself — is as effective as Prozac or Zoloft in treating major depression.

Research among athletes and students has shown that positive self-talk results in improved performance across a number of measures. For instance, a study of national champion figure skaters identified more than 150 mental strategies they used to become champions. The most common, used by over three quarters of them, was what’s called “rational thinking and self-talk,” which is objectively talking oneself through problems and stressors.

Just uttering the three words “I am excited” in a high-pressure situation is proven to relieve stress, improve self-confidence and lead to better performance, per research from Harvard Business School.

These are just a few examples. But you may be asking why you need self-talk. Why isn’t your normal internal dialogue good enough to get the job done?

Why We So Badly Need Self-Talk

Well, normal thought patterns tend to reinforce existing beliefs. And especially as ADHD adults, we are the products of huge amounts of negative programming. By the time we’re 18 years old, we’ve been told “no” about 148,000 times. One hundred forty-eight thousand times we were told: “No, you can’t do that. No, do not try that. No, that’s not for you.” And so on.

This contrasts with what is likely a fraction of that number of times we were told: “Yes, by all means, you can do that. Yes, go for it.”

As a result, according to behavioral researcher Shad Helmstetter, up to 77% of our thoughts are negative and counterproductive and work against us. And with about 70,000 thoughts a day on average, that’s a lot working against us.

So the biggest reason we need self-talk and not just more internal dialogue, is we have to deprogram that thinking — much like a coach or therapist does. Reversing some of the negative loops that are holding you back is just one — if not the most important — of the many ways you can use self-talk. 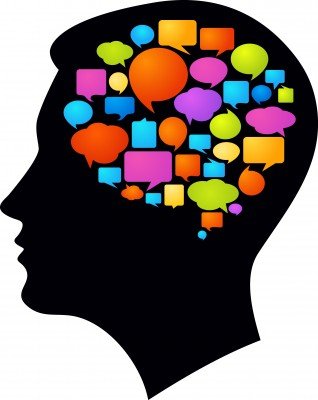 “Why does this crap always happen to me?” “I’ll never quit smoking.” “No matter what I do, I can’t lose weight.” “I’m never gonna be able to do this job really well.” If you can get in the habit of catching yourself in these loops, you can use self-talk to reverse them.

Self-talk can help break and form habits. My grandfather smoked two packs of unfiltered Lucky Strikes a day for 60 years. Then one day, when he was 82, he just flat out quit. I was still smoking then, and I asked him, “How the hell did you do it?” He told me, “I took the smoking card out of my brain and swapped it for the non-smoking card.”

In other words, he changed his identity as a smoker to that of a non-smoker. He no longer used the inner dialogue of the smoker — “I need a smoke. Boy, a smoke would sure be nice right about now.” With the changing of that circuit board, that language was replaced by the self-talk of a non-smoker — “Smoking is disgusting. Smoking will kill me.”

If self-talk can help end powerful addictions, work as well as medications in treating depression and help athletes perform at the championship level, think of how you can apply it to things like…

Really, anywhere there’s a gap between your current performance and your potential, self-talk can make a big difference.

A Key to Effective Self-Talk

Here’s a little more science on self-talk, which not only further supports its efficacy but specifically supports the way of self-talking many highly successful and influential people — LeBron James and Malala Yousafzai being just two examples — have in common…

Researchers led by Ethan Kross at the University of Michigan asked volunteers to give a speech — with just five minutes of mental preparation. They asked half the subjects to prepare by talking to themselves and to address themselves in the first person as “I.” The other half were directed to call themselves “you” or to use their own names while preparing.

Both groups noted the content of their internal dialogue as they were preparing the speech.

The results were striking in two ways. First, those who used “I” had a mental monologue along the lines of: “Oh my god, how am I going to do this? I can’t prepare a speech in five minutes without notes.”

But those who used “you” or their own names were more likely to give themselves support and advice, saying things like: “You can do this. You’ve given a ton of speeches before.” They sounded more rational and less emotional.

This phenomenon is called psychological distancing. Kross says, “It’s almost like you are duping yourself into thinking about you as though you were another person.” Using second- and third-person pronouns as opposed to “I,” you create psychological distance — a technique used in several psychological therapies that help manage anxiety and emotional distress.

But most importantly, in addition to these powerful self-regulatory effects, the second- and third-person group members were calmer and more confident and performed better on the task than those who referred to themselves using “I” or “me.”

So, when you use self-talk, refer to yourself in the third person — ideally using your name. (“Hey Alan, this is a pretty good blog post!” “Oh, thank you Alan!” “You’re welcome, Alan.”)

In his bestselling book, “Keep Calm and Carry On,” Mark Reinecke, Ph.D., notes, “If we view a problem as intolerable and overwhelming, it will be. If we view the situation as a challenge but a manageable one, it will be. It’s all in the way we look at it.”

Which is to say, it’s all in the way we talk about it with ourselves.

Remember, whatever is in your way is yours to crush!

Want to Learn 3 Simple Ways to Use Self-Talk to Manage Your ADHD?

I dedicated an episode of Crusher™TV to The Power of Self-Talk, where I share several evidence-based ways to use self-talk to get more done and beat the overwhelm — and you can click the image below to watch the preview of the episode. 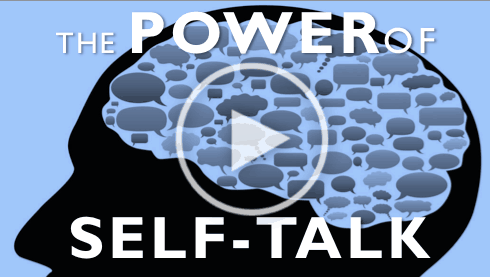 P.S. You might get a lot out of watching that entire episode of Crusher™TV where I dig deeper into this topic. (You can become a member for a buck and cancel any time ya like.) You can PREVIEW recent episodes here.

P.P.S. Also, if these distinctions and solutions resonated with you, you might want to check out my #1 Best Selling book, Zen and the Art of Productivity: 27 Easy Ways to Have More Time, Earn More Money and Live Happier.