Home/Blog/Tame the Chaos with Productivity Rituals

Tame the Chaos with Productivity Rituals

“Most of the actions that result in an extraordinary life are small and easy.”

That’s a quote from my friend, personal development guru Jonathan Butcher. And those small, easy things he’s referring to are just habits, routines and productivity rituals practiced over and over again.

Yes, habits, routines and rituals are the secrets to getting more things done more easily, more automatically. Hence the many books and blogs with titles like, “The 7 Habits of Highly Effective People,” “Morning Routines of Movers and Shakers,” or “The Daily Rituals of Billionaires.”

But habits are one thing. Routines are another. And rituals are in a league all their own.

I’ll make a few distinctions between habits, routines and rituals, and provide an example of one of my own power rituals that you can use to get more clarity, get more done, and reduce the overwhelm.

While habits, routines and rituals do have two things in common — they are all things you do repeatedly for some benefit, and with repetition they use less energy and willpower to undertake and complete — that’s where the similarities end.

Ritual is defined as, “a solemn ceremony consisting of a series of actions performed according to a prescribed order.”

So, whereas habits and routines tend to involve singular actions, a ritual is a set of actions. Think of your quick morning shampoo vs the ritualistic series of treatments you’d get at an exclusive $500-a-pop hair salon. (Which would make you more irresistible than you already are? The ritual, of course!)

Habits and routines are focused on the completion of a task. Rituals focus on the performance. Example: Tony Robbins performs a ritual series of actions before going on stage (breathing exercises, jumping on a mini-trampoline and other pscyh-ups). He intrinsically knows what workplace psychology expert Michelle McQuaid says: that rituals “shape the way our brains are feeling, thinking and acting.”

Last, whereas habits and routines require minimal engagement – sometimes none — ritual requires full engagement. You barely need to be conscious to shave or vacuum. A ritual asks that you be fully “in the Now”, which is where productivity magic happens. 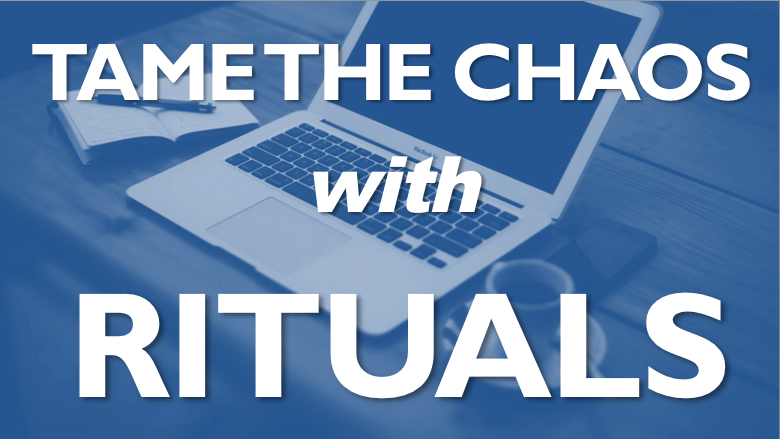 Positive habits and routines are great. But rituals are chaos-crushers.

An Example of a Power Ritual

Imagine if you could power through your day, thinking more clearly, getting more top priority tasks banged out, and actually having reserves of energy at quitting time. This is the power of power rituals. What’s a power ritual?

There are rituals like having your morning coffee just so, sitting down at a certain time with a certain kind of music on, in a certain place where you tend to be particularly productive. That is awesome – keep doing that ritual.

But a power ritual is a bundle of evidence-based power-hacks that, practiced daily, create near-term clarity and long term compounding accomplishment. Here’s one of my four daily power rituals…

One. I begin with spending just a couple of minutes listing things for which I’m grateful. What? Yep. Why? Because, research from Harvard’s Shawn Achor shows that when you identify three things for which you are grateful every day for 21 days, you carve neural pathways that give your brain a higher baseline of optimism and happiness.

Two. I set my “Three Biggies,” as I call them. Those are the three things I want to get done for the day. But no more than three. Why? Identifying more than three priorities statistically reduces your odds of finishing ANY of them.

Three. I calendar those priorities – giving them each a time slot. More science: A task that has been assigned a time and place is 50% more likely to be completed.

That, my friends, is a powerful morning ritual – giving you clarity for today’s work, and reinforcing a longer-term goal. I guarantee you that the most successful people you’ll ever meet have some form of consistent morning ritual. And as I mentioned, as you repeat these actions, they become easier and easier to do, drawing less and less of your energy and willpower.

P.S. If you think building some rituals into your life could help you be more productive and less overwhelmed, I’ve devoted an entire episode of Crusher™TV to this topic, in which I share each of my evidence-based, “4 Power Rituals that Will Change Your Life.” I also interview certified professional organizer Eliza Cantlay, who has a powerful ritual for organizing and powering up your workspace. Check out some free episode previews HERE. –ab

8 Responses to “Tame the Chaos with Productivity Rituals”

I love doing number one and number two in the evening before bed because it helps me sleep better. I love number four and can’t wait to see the results of implementing it. Thank you.

Keep in mind those are just four parts of ONE Power Ritual. There are FOUR Power Rituals in total — Morning, Work, Recovery and Review. Keep working that gratitude!! AB

Love this post- I already did point 3, now adding 1,2 and 4 will be my performance rituals:).

Thanks — try to do them every day! AB

I enjoyed this bit of advise and will follow it each day. Thank you.

That’s indeed the key Dee!! Every day. (And don’t get freaked out when you miss a day. Just get back on that horse and keep ridin’.) -AB

I LOVE this post Alan! Particularly the distinction between current rituals and power rituals. I’m going to try the first power ritual of gratitude tomorrow morning – and then work up to doing all four over the week! Keep them coming!

Thanks Cynthia!!! Great to hear from you and I trust you’re crushing it!!! A