Home/Blog/The Brain Science of Clutter: Why We Can’t Let Go

The Brain Science of Clutter: Why We Can’t Let Go

You Don’t Have to Be a Hoarder to Hang On to Clutter!

There’s a lotta noise goin’ on in our ADHD brains. And that noise is made worse by the visual noise around us. We are often our own brain’s worst enemy by maintaining a home and/or an office that is full of energy-draining STUFF (a.k.a., clutter).

Clutter is not just a problem for hoarders. Most of us have stuff that is not adding to our lives (and could probably add significantly to someone else’s…but let’s put charitable donations aside for the moment).

What the Science Says

New research helps explain why getting rid of stuff can be so difficult. Researchers at the Yale School of Medicine recruited both non-hoarders and hoarders, and tracked their brain activity while they sorted through various items and decided what to keep and what to discard.

The subjects sorted through items like junk mail and old newspapers, some of which were their own, others of which were added to the mix by the researchers.

When confronted with the prospect of discarding their OWN junk, many showed increased activity in two regions of the brain: the anterior cingulate cortex and the insula – both of which are associated with conflict and pain.

This brain circuit also generates cravings among smokers or drug addicts trying to quit, because when it is triggered, it signals that “something is wrong.” And then motivates you to look for a way to stop the pain or anxiety—so smokers will then smoke, addicts will get more drugs, and hoarders …will hold on to their junk.

The Upshot? Letting go of junk can be literally painful to you. But it’s only painful when it’s…YOUR junk. 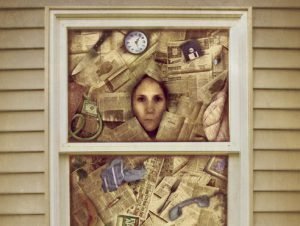 And there’s another part of the brain that gets activated particularly in hoarders: The ventromedial pre-frontal cortex, or vmPFC. It’s associated with emotions, identity, and personal meaning. Some call it our sense of “me-ness”.

It’s the reason that hoarders look at something as simple as an old shopping bag, and feel it is connected to who they are. Making it all the more painful for them to get rid of it.

But you don’t have to be a hoarder to recognize when your vmPFC is kicking in: The wedding dress. Your high school varsity jacket. The watch you never wear…the earrings you wouldn’t be caught dead in…but…they’re YOURS, and they have meaning and “me-ness” attached to them.

The Stubbornness of Stuff

Ego Gratification, or, “me-ness”, is just one reason we keep stuff unnecessarily. There’s Acceptance – you just accept that, “Hey, this is the way my home/office looks.”

There’s Perfectionism: “I’m not gonna deal with this stuff until I have the PERFECT PLAN.” Ya, and that plan hasn’t arrived now in, how many years?

Then there’s Guilt… The hardest things to discard, experts say, are the ones that hold some sentimental meaning. Because people confuse letting go of a thing with letting go of the person who gave it to you.

And the Big Kahuna…Procrastination. We know this one all too well. But here’s a nice quote that might shake some cobwebs out and get you to confront some of your junk… 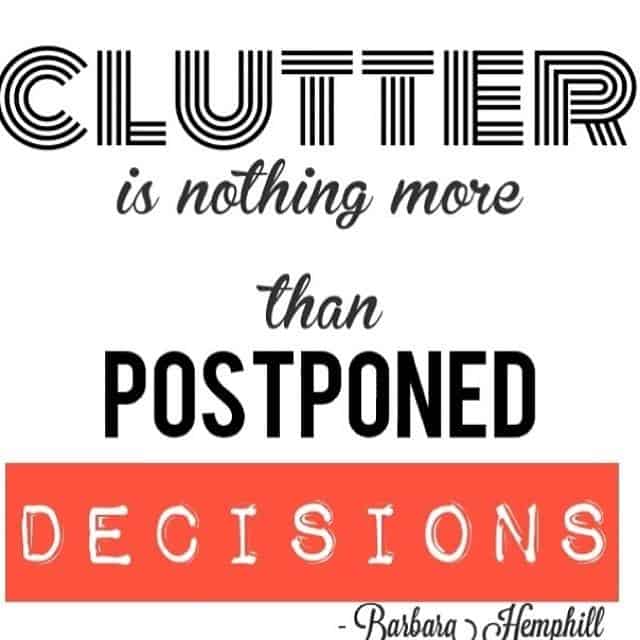 In upcoming posts, I’ll be sharing the impact of visual and physical clutter on your BRAIN and your PRODUCTIVITY, and I’ll provide a step-by-step, super-easy process for creating a Place of Peace at your desk! Stay tuned.

Meantime, all these topics around clutter are the focus of an episode of Crusher™TV. Here’s a preview – I hope you can tune in!!

10 Responses to “The Brain Science of Clutter: Why We Can’t Let Go”

Okay Great description for Neurorypicals to read, but this is a useless post for us adhders. WHT IS THE SOLUTION??????

There’s not one solution my fellow ADDer. And no solutions are immediate. I think the post can indeed be useful for our ADHD Tribe, which is why I wrote it. First, the more AWARE we are of how and why our brain works with regard to clutter, the better able we are to be able to deal with it. Also there are a number of solutions on offer in other ADD Crusher™ blogs on the topic, one of which is linked to at the bottom of this one. I hope you’ll check it out, and I hope you’ll let me know your thoughts, positive, negative or otherwise.

I’m rooting for you! -APB

My gf has thousands of emails to and from her going back to 2003 all printed out in hardcopy and slipped into plastic sheet protectors housed in 3-ring binders. The binders are lined clear across a very wide closet shelf that is groaning from the weight.

She has kept every Christmas card since at least 2003 and hangs a bunch of the old ones over the lights and garlands at Christmastime.

She has a medium-sized cardboard case crammed full of used ziplock bags of various sizes which arrived with her moving from Australia to Oregon in 2003, and then made its way down here to SOCAL in 2020.

She has/had 31 pairs of eyeglasses as of Summer 2020. She went through them all then, numbered each pair, made a highly detailed cross table of details including when and where each pair was acquired, what they were for, etc. The 25 or so pairs she does not use are kept in a medium-large plastic bag, each pair bearing a tiny white sticker with its ‘stock number’.

She once sheepishly hauled a medium-sized duffle bag down from a shelf in the closet, zipped it open for me and showed me literally about 500 brand new magic markers in every bright color there is.

I could go on with this forever ….

This is extraordinary! I guess the question is, Is she happy? Is she living life on her terms? Or is all this really a tremendous burden on her. And the second question is of course, is this affecting YOUR happiness?? -apb

I have large decluttering and purge projects right now that I have procrastinated on for so long. I’m going to pretend I’m doing it for a client I have never met. Maybe depersonalization is the key.

That “depersonalization” could be an effective strategy. Keep us posted on how it goes! -AB

Thanks Alan.
Now that you mention it..this is interesting. My wife is not a hoarder but definitely has a lot more “stuff” than me. Some of it is the personal things but the stuff that bothers my ADD brain are the things that rarely get put away, like flyers and mail, laundry, dishes etc.
She just doesn’t feel the urgency that I feel to get rid of or put away CLUTTER. I joke and say they become “part of the landscape” but she really doesn’t care or see it the way an ADD’er sees it.
The most interesting part is my office and desktops are definitely not clutter free!
Any other tips for the clutter person?
Thanks.
Clint.

Hi Clint. You’re definitely singing my tune, as my ADD brain is driven nuts by MY wife’s leaving thing un-put-away. It’s like a trail of destruction (I’m exaggerating but…) that I always seem to be cleaning up. Not that she’s a slob, but more that I’m super-sensitive to things not being where they belong, cuz after years of leading a disorganized life, NOT having total order drives my brain and eyeballs bonkers. I’ll soon be posting a blog on how to de-clutter your work environment. Thanks for your comment and stay tuned for that post! AB

Alan- thank you so much for bringing this topic to the front of my computer. I have begun the process of ridding myself of everything!! Can you send some pep talks to deal with the ‘stuff’ and know when to stop for the day? Overwhelm creeps in.-then exasperation. Today I gave away 2 large bags of clothes- outgrown-re=gifted children’s toys to younger members, and have a ‘shred’ box which lives next to my desk.
I am writing these things in my success journal b/c this is a big deal for me !!
Happy holidays to you ! Katie

Congrats on your successes Katie! Last night on CrusherTV’s episode I did a whole schtick on how tough it is to let go of stuff just cuz it’s “ours”. When you can break through like you have, even if in a gradual way, you’re reinforcing your limitless power. Keep crushing and thanks for your comment and inspiration!! AB