The Relationship of ADHD and Substance Abuse

Recently I blogged about the power of AWARENESS as an ADHD alternative treatment. Awareness of the impact of diet…of the full range of treatment options…of the damage of unchecked negative self-talk…of your own strengths and weaknesses, etc. All things that can empower you if you have greater awareness. Well, you can add to that list, awareness of the frightening statistical friendship of ADHD and substance abuse. Once again, I’ve listened to an archived show on Attention Talk Radio – this time, an interview with clinical psychologist Dr. David Teplin – and come away with a must-write blog on substance abuse as one of the top adult ADHD symptoms.

Did you know that those with ADHD are six times more at risk for substance abuse than the general population, and will suffer with the abuse for a longer time? It gets uglier…

Wow, not lookin’ so good for us!! And that’s not all – don’t forget all the behavioral issues that result from these abuses: drunken driving, arrests, failed relationships, poor career prospects…and on and on. As if the ADHD alone weren’t bad ENOUGH!!!

But wait! There’s more! Then we of course have to contend with the frequent ADD/ADHD co-morbidities of anxiety, depression, bi-polar, oppositional defiance disorder, and so on – that make matters worse, as well as confounding proper diagnosis and treatment. 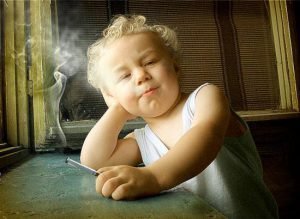 WHAT is Going ON Here?!?

Well, as a former alcohol and drug abuser myself, I’m not surprised at all these ugly stats and the isolation of substance abuse as one of the most prevalent adult ADHD symptoms.

Looking back at my teen years, it’s pretty clear how I got my start. They say marijuana is the gateway drug – but I feel regular old cigarettes are a bigger gateway for ADDers. And sure enough, we ADDers start smoking earlier that the average kid smoker – and are less likely to quit. And the gateway effect is aided and abetted by the gravitation to permissive peers and like-minded others who’ll accept us and our behaviors, making for a snowball effect. Here are some of the why’s that Dr. Teplin touched on…

But back to the awareness lesson here. Whether or not we are grappling with some substance, having the knowledge about this dysfunctional relationship can help our overall mission of greater understanding, facing new challenges – and maybe even equip us to help a fellow ADDer in need. If someone you suspect of having attention disorders also has this most pernicious of adult ADHD symptoms, approach gently….Bless!!

4 Responses to “The Relationship of ADHD and Substance Abuse”

Where did you get these stats?

Hi Marissa, the stats come from a range of research-based resources. Because I used these and similar stats in my TEDx Talk on the subject — http://tinyurl.com/AlanBrownTEDTalkADHD — the TED Organization fully vetted them, although the data are more than 6 years old now. A google search will yield more info if you’re interested in pursuing further. AB

Awareness is empowering and helps to shed light on difficult topics. Fortunately there is treatment available for all of these conditions which will help the individual to live a healthier and more productive life.