Home/Blog/This Is Your Brain on Computers! Part 2

This Is Your Brain on Computers! Part 2

The Myth of Electronic Gadgets and Productivity: Maybe They Should Call Them “Stupid Phones”

Last blog post I mentioned that I’d recently shared the stage with Dr. Ned Hallowell, Laurie Dupar and others at the Screen Time Sanity Telesummit, where experts shared wisdom on the insanity created by our gadgets. I listed some eye-opening facts about how it’s not just ADHD kids with media-abuse problems: adults are prey to similar misdeeds.

In this post I’ll share some of the costs of media mayhem – costs that directly hit your productivity’s bottom line. (And you thought your gadgets made you MORE productive?!)

[In Part 3, some tips for mitigating media-based miseries.]

The Myth of Multitasking 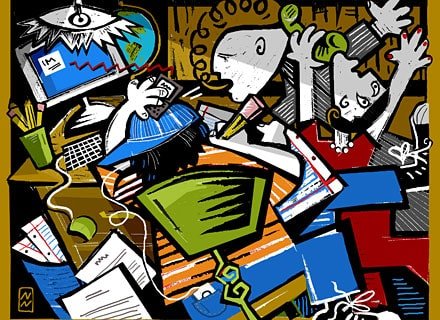 These gadgets – our smartphones, tablets and laptops – are fueling our multitasking behavior – and the myth of productivity that goes with it.

No one can deny the massive leap forward these devices have ushered in – in efficiency, convenience, joy and even saving lives. But with them has come a culture of multitasking – which we all assume to be a benefit. After all, why work on one thing when we can work on many things?!

Yet we’ve known for decades that the brain can barely process two streams of information, and more importantly, can’t make decisions about them both. Plenty of research – at Yale, MIT and Stanford – has tried to prove that multitaskers can re-wire their brain to allow such multi-processing. None of the studies has proved out.

Here’s what some of that research has proved out:

In sum, multitasking is for suckers! Thank you, Yale, MIT and Stanford.

And if you don’t believe the research, just think about it in very practical terms…

The Impact on Prioritization

I mentioned above a finding that multitaskers seek out new information even when it’s not needed – an obvious waste of time and mental energy.

So to heavy multitaskers, any hint of something new sets them off on a frenzied search as if it were critically important. Whereas the non-multitasker will know to ignore these primitive signals and focus on the more meaningful meal prep.

Hmmm. Chasing imaginary problems vs doing what’s right and important. Um, I think that means…Multitasking is MAKING US [MORE] ADHD!!

A sampling of research in this area:

This is your brain on computers. Heard enough? Me too. In Part 3 of this screen-time-insanity series, I’ll offer some corrective action steps.

P.S. Hey – I just heard your smartphone saying something. I think it said, “Leave me the hell alone for a coupla minutes, will ya?!”

Oops…Sorry. That was my phone. ab

5 Responses to “This Is Your Brain on Computers! Part 2”

I believe TV and even music via ipods, ipads, stupid phones, etc also take away our ability to interact with real humans. Growing up, we would watch TV together and/or movies, but were we REALLY communicating and interacting with each other? I don’t think so. Lately my home is quiet- no music via Spotify, or I heart radio, no TV in the back ground, just really digging the “silence” and sound of humans….

Love that, Wendi. The other GREAT thing about quietness, is that is when the mind is opened wide to new ideas and problem solving. I just did a video blog on this for the CrusherTV Facebook community. I might post it to ADDCrusher.com blog also. Stay tuned…A

I also think these Stupid Phones are adding to this era’s problem with a sense of unwarranted entitlement. I.e. “I texted you… you should text me straight back”… as if the recipient of the text was just sitting there waiting with nothing to do, other than to reply to the text. We feel compelled to respond to a text no matter what we are doing. Imagine being in a board meeting when a friend barges in to make after work plans – we’d be mortified! Yet answering texts while eating dinner with the family seems acceptable to so many. Yeah – I text. But I’m not a big fan. Most of my friends/family know that texting me means you might get a response that minutes, but (more likely) within 48 hrs (usually because I forgot to text back, but that’s another discussion!)

Great point Andrea. Hadn’t really thought about that. I suppose this started with the telephone (Why hasn’t she called me back?)…then emails (I KNOW he’s checking his email, dammit!)…and now split-second text reflex. Hope you tune in to the debut of CrusherTV. Will be treating this issue with some humor and discipline. Stay tuned for more news on that!! -Alan

Very timely for all I am sure. Thanks!