Procrastination. We all know how much we ADHDers are doing it…

…and we all know the costs, the aggravations of procrastination. (Someone might be yelling at you right now cuz something hasn’t gotten done yet! Or maybe that unpaid parking ticket is just a few days from morphing into a brief jail term!)

So I’ll cut to the chase: Some solutions in the form of “brain hacks.”

I use a number of my own tricks to keep my to-do list small and my businesses cranking. Plus, as the host of Crusher™TV, I get to interview the best minds on all kinds of productivity-related subjects. So I wanted to share some of the best brain hacks for beating procrastination from a few of our past Guest Experts on the show… 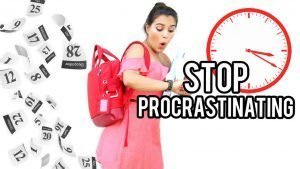 In Episode 7: Stop Procrastinating, psychologist Ari Tuckman shared what your brain does when you don’t want to do something: You make arguments for how much the task sucks and how much better it would be to be doing something else. This mental stance is aided and abetted by what’s called “temporal discounting” – the farther into the future some reward or pain is, the less significant it appears.

As such, Air articulated the “brain hack” of re-framing a dreaded task, to compensate for such discounting: asking yourself, “If by 10am I don’t get going on this task, what will the ‘10pm me’ be saying? How ticked off will she be?” And if you answer that honestly, you can trigger a little motivational fuel to get you rolling in the right direction.

And if you do get moving on that task, the 10pm you will be STOKED. Envisioning that outcome gives you another boost of proactive brain chemicals.

Eric Tivers: Acknowledge What is “Imbortant”

Leave it to Eric to coin a new term. In Episode 15: Get More Done with Less @#$%!, he calls out the many things we put off…and put off…because they’re boring and…boring! Yet, they are important – hence, “imbortant”.

Just acknowledging this is a powerful procrastination-buster, because you’re dimensionalizing the key reason you’re stalling: certain tasks are mundane and thus don’t fire up your ADHD brain with any level of interest. You know: going through your email inbox, paying the bills, laaaauuuundry, etc.

His remedy for such imbortant tasks? Just schedule some time for “processing” of imbortant stuff. You don’t have to finish anything/everything; just put a block in your calendar and allow yourself to be BORED…as you do the work. Ideally, you schedule a little time each day for such processing…and fewer imbortant things will come back to haunt you.

Jeff Copper: Ask, “What Is Hard About This?”

We procrastinate a lot because we’re just not really sure what to do! In Episode 8, legendary attention coach Jeff Copper had some wise words to share about getting unstuck from this predicament. And in classic Copper style, he says, “Don’t try harder – try different!” Which you can do by asking ourselves, “OK, why the heck IS this so hard to start?”

If you just ASK yourself, “What’s hard?”, you make a huge leap toward the solution, and from there it’s easier to leap…into action!

I shared some of my brain hacks in Crusher™TV Episode 35: How to Do Something You HATE Doing! Stop by Crusher™TV and watch the latest free previews!

OH — and a BIG P.S.: If you’re REALLY sick of procrastination messing up your life, check out our award-winning ADD Crusher™ Videos & Tools Program. This instructional “virtual coach” is endorsed by over 100 ADHD coach worldwide.  ab

I will try this hack though for bills ect.because they are easily forgotten and swept under other piles of papers. Dishes are a little harder to forget. Ignore is easy, but forget no 🙂

I get tired of waiting for myself to do something boring/important like dishes. Lately I’ve given up on the waiting game.so i decide on something else important.it may not be as important as dishes but at least i don’t feel like a complete looser after being on fb for two hrs in the afternoon while “waiting for the spirit to move me” Eventually the spirit does move me to do dishes but at least it’s while dusting

This is kind of a neat “hack” that you do. I do something similar: when I don’t have the energy/will/interest to start in on a really tough task, I’ll set a timer for 20min and just engage in some easy, mindless work. When that 20min is over, my brain is likely in a different part of the work/recover cycle and I can then usually jump into the tough task. Tx for sharing! AB

I just printed this off for fellow teachers to use as a writing prompt for high schoolers. How does this apply/not apply to your life.

LOVE IT!! Thanks for sharing it!!

Thanks for tossing a rope to me to pull me out of my mindset.
I am considering the suggestions to begin my “new” to-do
lists. I’ll let you know … even that is going on my list! Luv, H.

Yay Helaine!! We got lotsa rope for ya!!