Having established in the last post that ADDers tend to possess the ADHD “risk-taking gene” – I suggested that there is a way to go beyond the inherent RISKS of having it (um, addiction, climbing high things, jumping off of high things, exceeding 160mph, etc.), to see its potential BENEFITS.

The ADHD Risk-Taking Gene in Creativity

The New York Times recently did a piece on Craig Venter, the guy who…

How does he think up this stuff? As the Times continues, “He may not appear to be thinking about these things. He may not appear to be thinking at all. He may appear to be riding his motorcycle through the California mountains, cutting the inside corners so close his kneepads skim the pavement. This is how Venter thinks. He also enjoys thinking on the deck of his sailboat, halfway across the Pacific Ocean in a gale, and while snorkeling naked in the Sargasso Sea surrounded by Portuguese men-of-war. When Venter was growing up in San Francisco, he would ride his bicycle to the airport and race passenger jets down the runway. As a Navy corpsman in Vietnam, he spent leisurely afternoons tootling up the coast in a dinghy, under a hail of enemy fire.

“What’s strange about Venter is that this works — that the clarity he finds when he is hurtling through the sea and the sky, the dreams he summons, the fantasies he concocts in his most unhinged moments of excess actually have a way of coming true.”

This is the risk-taking gene in ACTION!! You see, Venter understands how taking risk – injecting stimulation into his thinking sessions – opens the window to creativity. It’s a form of meditation – much like the meditative state I enter when doing 160mph on a motorcyle (on a race track, of course – NEVER on the street, which is risk of the very stupid kind).

The Risk-Taking Gene in Business 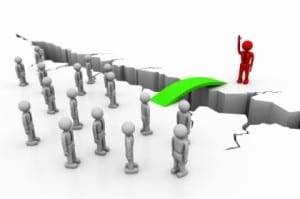 We’ve all heard the stats about entrepreneurs being disproportionately represented by our ADHD brethren (and sistren, if that’s a word). Surely, this has a lot to do with our disdain for rigid career paths that begin in a cubicle and end in a bigger cubicle with maybe a window. And certainly has to do with our hyperactive mind’s desire to always be trying something new, exciting, even scary. But it’s also that genetic code that says, “Hey, I’m willing to sell all my crap and move to Montana to start an organic horse radish farm…or build a freakin’ race track…or both!” All great entrepreneurs possess the risk-taking gene – or they wouldn’t be entrepreneurs…they’d be kickin’ back in their cubicle.

In ADD Crusher™ Video I, I teach the power of two “nagging desires” – to keep the fires of forward movement burning – a “negative nag” and a “positive nag”. The negative nag can be the collection of stupid things you’ve done (many, thanks to your risk-taking gene) and maintaining a healthy regret to ensure you don’t dope off again. Your positive nag might be your strong desire to have independence – career, financial, personal, or otherwise – and your risk-taking gene can help carry you along that path, keeping you from weaseling out of tough decisions or following the path of least resistance. In this sense, the gene can be a form of alternative ADHD treatment!

Of course, this is not to say that we should be running around taking unnecessary risks. It is simply to say that there are impulses and tendencies we have that don’t ALWAYS have to be viewed negatively. Listen to your ADD DNA. Take some smart risks…and reap the rewards.

To Risk is to Crush…